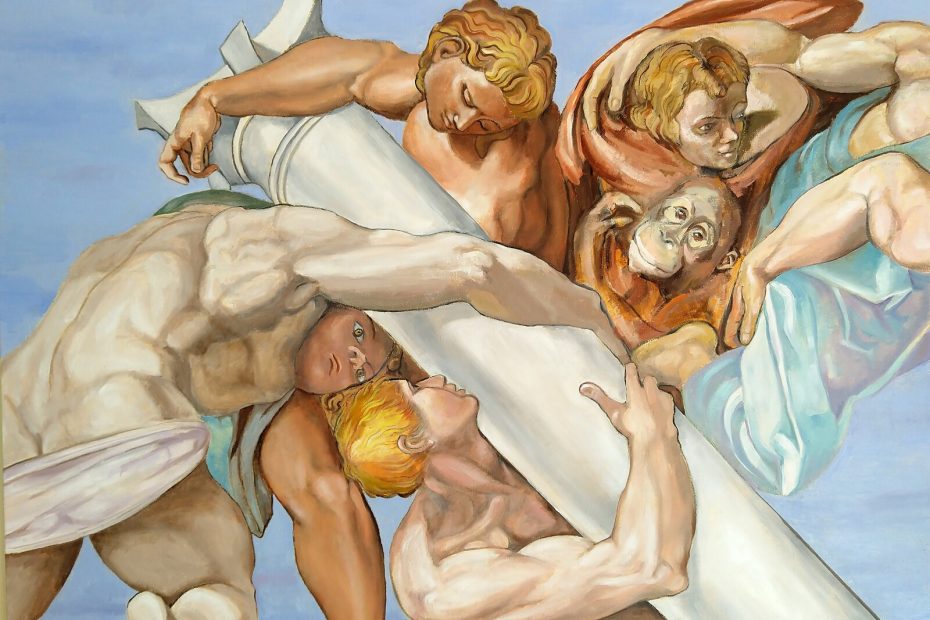 I was named after the Adélie penguin species that my father studied in Antarctica, and I grew up in Baltimore with screech owls, ducks, and quail as part of my family household. I enjoyed assisting my ornithologist father on weekend trips to the Chesapeake Bay locating and recording neck-collared tundra swans. My passion for the well-being of birds and animals manifests in my work.

My primary theme inspired by the Sistine Chapel ceiling pairs Michelangelo’s exquisite brightly colored figures of Prophets of the Old Testament and Sibyls (female prophets) of the Classical World with endangered and vulnerable species. I view these prophets in my compositions as warning of animals in peril and threats to the earth, including global warming. Figures and animals often appear in dialogue and draw the viewer to contemplation.

As my study of Michelangelo continues to evolve, I extend my focus to Michelangelo’s Mannerist figures from the wall of The Last Judgement, which Michelangelo executed twenty-five years after the Sistine’s ceiling of the High Renaissance period. I quote figures of The Last Judgement, many resurrected from the dead on their way to heaven or to hell, to express heart-wrenching themes of today. I hope that viewers will enjoy the pageantry of Michelangelo’s colorful figures of 500 years ago, appreciate their juxtaposition with images of endangered species, and ponder the state of our world and its ecology.